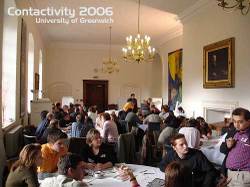 Just spent two interesting days at Contactivity at the University of Greenwich. Contactivity is a sort of fluffy people focused KM event which has grown out of KM Europe (which is considered to be too systems focused).

The first Contactivity event ran alongside KCC Europe in Amsterdam last November (see previous entry). It’s supported and promoted by Knowledge Board. It was an unusual event to say the least, with lots of opportunity for participants to contribute to the agenda.

Day 1 was the most structured – I helped facilitate a Cayenne project simulation for over 60 people, we also did some structured networking (Peter Toxler) and witnessed the launch of a new free KM book (see separate article).

Future Forwards and Backwards – This scenario planning tool is used a constituent of the Cynefin stuff used by Dave Snowden. It’s a little confusing initially and we didn’t really have time to complete the exercise properly, however I do like the approach and it would be good for a whole range of scenario planning activities (including defining your business strategy).

Open Space – An free-form collaborative experience with built-in agenda setting…the best bit is the principal of ‘two feet’ which allows you to circulate freely until you find something that interests you.

Taking part in three such events in one day was probably a little ambitious – at times I would have loved to have had a breakout session for a couple of PowerPoint presentations – if only for the visual stimulus! One advantage of such an event is the complete lack of notes one makes – you’re so engaged in discussion you don’t have the opportunity to transfer your own ideas or reflections to paper. However your own notes are partly replaced by the flip charts that each group produces – the plan is to share this as an output online (see links below). The strength of Contactivity apparently is in the conversations and I have to agree that my lasting impression is of a bunch of slightly quirky people (me included) who have a passion for exploring issues in the domain we loosely call KM.

The next Contactivity is in Israel in September – don’t think I’ll be able to make that but I’m keen to do another one closer to home sometime. Not sure if there are any plans to run it alongside KCC Europe this year?

Photo is courtesy of Ed Mitchell at KnowledgeBoard (forgot my own camera) – lots more images at Flickr.

If you took part in Contactivity and you are reading this please leave a comment!

Digital learning architect. Authentic guide on all things e-learning. Technology advocate but with a sprinkling of cynicism about shiny new toys.

Not sure I’d agree with all of this but it’s insightful thinking around how and why we learn.

The Principles of Learning Design. 24 core principles, summarised on one (long) page.

This book is the bible on blended learning approaches More Than Blended Learning: Creating world-class learning interventions by ... https://www.amazon.co.uk/dp/B00QGW9IVS/ref=cm_sw_r_tw_dp_J7631S37NFA5ZTYHFVSJ via @AmazonUK

How NOT to make an explainer video https://youtu.be/MXW0bx_Ooq4 via @YouTube #explainervideo #elearning #digitallearning